The concept of disruptive innovation describes a process where new ideas and technologies are generated that render existing ideas and technologies obsolete.  These events often take place in very short timescales however, profound changes can take longer.  The sudden changes caused by new inventions are usually associated with a dramatic impact to the way people work and the skills they use.  There is inevitability a wider impact on how organisations operate and the markets they trade in.

Disruptive innovations can have such a profound impact, that it is important to consider the wider impact, particularly when these issues can be complex and difficult to understand.  Right now, the impact of technology and in particular, information technology is naturally high on the priority list, alongside tackling environmental issues such as pollution, climate change and the Coronavirus Pandemic.

The Internet, social media platforms and mobile high tech gadgets are having a profound impact on our societies and how we live and work. While we cannot underestimate the massive impact of the Coronavirus Pandemic, the power of personal networked computing has made possible for some, home schooling and flexible home working.

The pace of change is increasing and the digital transformation that is underway, has created a significantly demand for those people who have the skills needed to work with the latest technology.  There is now a significantly greater demand for those who have the skills to create and design software; organise the design information required to make intangible products; and solve complex problems such as genetic manipulation, predicting the weather or even climate change.

This trend is a continuation of a process that has transcended several hundred years where the need for practical skills has reduced while the requirement for solving intangible problems and concepts has grown.  To fully appreciate the disruptive nature of digital technology and the related skills revolution, it is useful to consider an example such as the impact of the invention of the electronic handheld calculator. 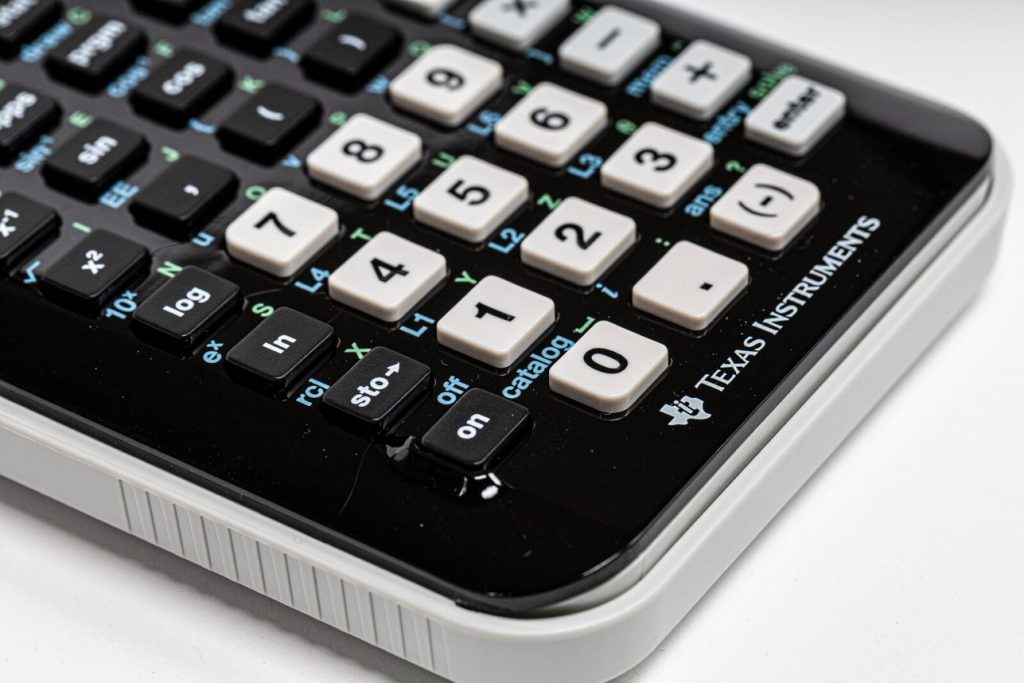 The emergence of the electronics age, led in 1961 to the development of the world’s first electronic desktop calculator, with a product called ANITA (A New Inspiration To Arithmetic/Accounting).  ANITA was manufactured by a company called British Bell Punch/Sumlock and weighed 15kg!

It was not until 1972 that, enabled by semiconductor transistor technology, HP launched the world’s first handheld electronic calculator (HP-35) that was able to perform calculations using logarithmic and trigonometric functions.

Prior to this point people used a combination of mental arithmetic and a manual calculating device called a slide rule or slipstick.  Slide rules were invented by William Oughtred, a British mathematician, in the early 1600s. By the time the electronic calculator was invented in the 1960s, the slide rule had been in use for around 350 years.

The launch of the electronic calculator was considered disruptive because within the space of a few years the slide rule was effectively rendered obsolete and production of slide rules was brought to an abrupt end.  The electronic calculator was faster, easier to use and cheaper.  It reduced the time required to conduct calculations and enabled people to spend more time on higher value problem solving activities.

It is perhaps worth reflecting that the slide rule/slipstick was used to design many complex engineering products that are still revered today: Concorde, NASA’s Space Shuttle and the Saturn V rockets used by the Apollo missions to put the first man on the moon.

The Industrial Revolution also led to the development of modern engineering skills. It’s possible to learn more about this period by looking at the ships on display at the UK’s National Historic Dockyard in Portsmouth and in particular:

While recognising that HMS Warrior has an iron hull, these ships collectively illustrate that for over 300 years warships retained 3 prominent common design features: they had sails, a wooden hull and a gun deck.  However, within 10 years of the launch of HMS Warrior, a new ship was launched called HMS Devastation.  HMS Devastation had a radical new design and was the first ocean going warship that had no sails or a gun deck.  Instead it was fitted with steam engines and gun turrets! 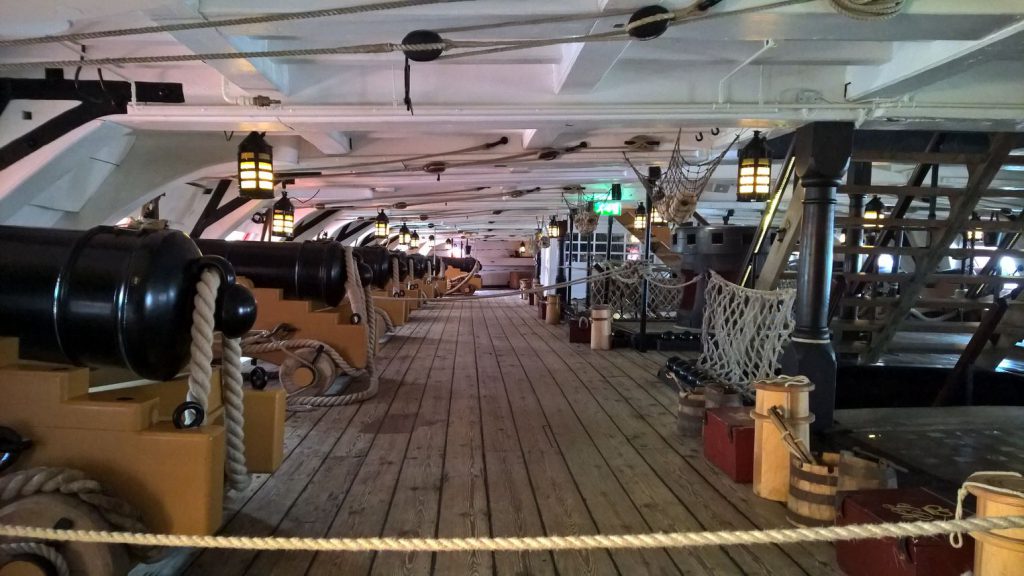 The picture of the gun deck of HMS Victory illustrates the cannons lined-up along the gun deck. The cannons are mounted on wooden trolleys and manoeuvred with ropes.

Throughout the Industrial Revolution, the power of ships’ cannons increased in line with the quality of iron that was being produced.  During the 1800s this increase was dramatic! At the same time steam engines also became more powerful and reliable.  As the power of cannons increased they also became larger and too heavy to manhandle.  Eventually it became necessary to mechanise the process of loading, aiming and firing the guns and the gun turret was invented.  The gun turret also offered greater flexibility when aiming and firing.

The adoption of steam engines and gun turrets led to massive changes in the methods engineers used to design ships which in turn led to the development of new skills.  Gun turrets were significantly more complex than cannons as they had hundreds of components.  At this point the concept of “modularisation” was developed to simplify the design process.

The concept of systems engineering also emerged to make life easier.  Gun turrets were considered to be the weapon system; the steam engine with drive shafts and propellers became the propulsion system; and the hull was considered as the main element of the structural system. 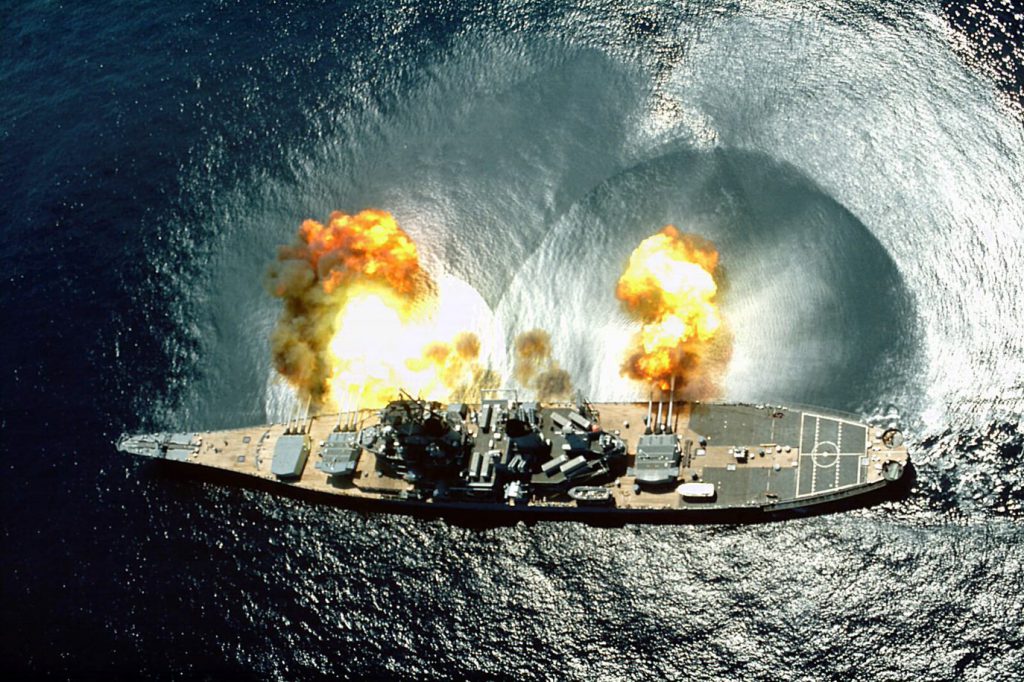 It’s important to stress that the evolution of engineering design methods is a complex topic and the explanation here is a massive simplification of what actually happened.

However, the aim of this historical summary is to provide a better understanding of a process that took many years – and continues even now with the rapid changes we are experiencing as part of the digital revolution.

Here’s a short (8 min) YouTube clip that explains how modern engineering design/critical thinking skills emerged from the Industrial Revolution. It looks at ships from the National Historic Dockyard in Portsmouth including HMS Victory, HMS Warrior and the Mary Rose.

As the number of complex high tech products and services has grown, so too has there been an increase in demand for people who have the critical thinking skills necessary to solve intangible problems and concepts.  The following list identifies engineering skills that this website is seeking to promote:

The world’s largest train graveyard is close to the town of Uyuni in Bolivia, South America.